Home / Our Journal
Previous  / Next 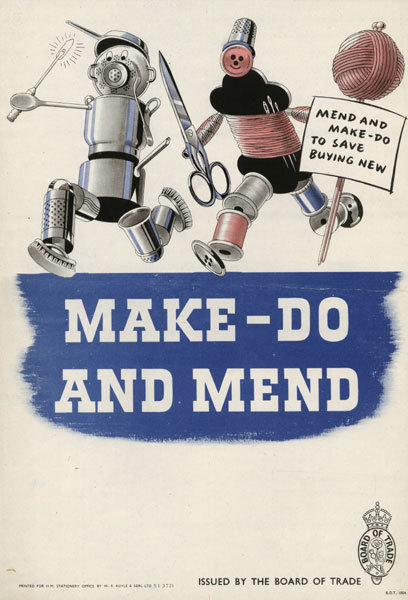 The rationing period during World War II is often described as a difficult time and yet also remembered nostalgically as a time of unity and good sacrifice. In fact, many of its rules and guidelines could still be applied today. “Make Do and Mend” focuses on clothes rationing, which was introduced in June 1940. With the nation’s industrial output concentrated on the war effort, basic clothes were in short supply and high fashion was an unknown commodity. Adults were issued as little as 36 coupons a year to spend on clothes. But a man’s suit could cost 22 coupons, a coat 16 and a lady’s dress 11, so the need to recycle and be inventive with other materials became more and more necessary. The government issued the leaflets included in “Make Do and Mend” to advise on how best to avoid wasting valuable resources by recycling curtains into dresses and old sheets into underwear; in short how to ‘make do and mend’ rather than buying new clothes. Produced from original material held in archives, the leaflets are also a nostalgic showcase of 1940s’ style, which makes them the perfect gift.

Comments will be approved before showing up.

Also in Our Journal Good grief, we're happy to finally let you know that as one of the lucky ones who pre-ordered our SOLD OUT Peanut collection, you'll soon have your hands on your EXCLUSIVE kits.
Read More 'Our Stitch & Story x Peanuts collection captures the thrill of creating something iconic from scratch and sharing it with family and friends.'
Read More

The perfect knitting kits to introduce you to knitting this fall

Fall is the time of year for hats and scarves, and chunky knit sweaters, in a color palette to complement the season.
Read More

Sign up to receive 10% off your first order. Plus exclusive offers, free patterns, and crafting tips.